Sumo Digital weigh in for OSD 2017

We’re honoured to have the support of Sumo Digital for One Special Day 2017. They’re pitching in big time, and will be livestreaming and donating some fantastic auction lots.

“Sumo Digital are always delighted to support SpecialEffect and the incredible work that they do,” said a spokesperson. “We are especially thrilled to be supporting Special Effect’s tenth anniversary fundraiser, One Special Day. 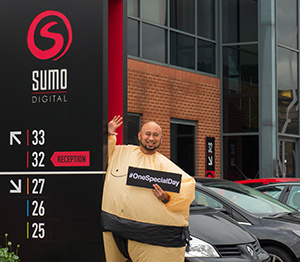 “Sumo Digital will also be providing a very special Snake Pass auction lot featuring one off Noodle and Doodle plushies, a limited-edition vinyl of the official Snake Pass Soundtrack featuring music by David Wise, signed by David and the Snake Pass team, as well as a Nintendo Switch console complete with a digital copy of Snake Pass.”

“We hope by taking part in One Special Day that we will raise further awareness of Special Effect, and encourage other’s in the industry to back the initiative and help to support this fantastic cause.”