Bryan’s gaming horizons have just been broadened through a combination of online support and an equipment loan from our specialist occupational therapy team.

Bryan, who works in the games industry as a researcher for Football Manager, has Duchenne Muscular Dystrophy. He’d been playing games using the left joystick of a standard Xbox controller and two small accessibility switches running through an Xbox Adaptive Controller. He felt his setup could be more effective, so he got in touch to ask if we could help him to game to the very best of his abilities.

Ahead of a video call with Bryan, our occupational therapists Frankie and Nomi communicated with him via email to build up as clear a picture as possible of his abilities and the games he wanted to play. During the call itself they identified equipment options from our extensive assistive tech loan library that could have the best potential to extend his gaming abilities. They also explained the various accessibility features in FIFA 20 and discussed the possibilities of accessing more complex games.

“Bryan was sent a low-force Xbox One controller and a mini low-force joystick to see which was easier for him to use as a left joystick,” said Frankie. “He was also sent a further four small low-force accessibility switches to try.”

After experimenting with the equipment, Bryan decided to trial the mini joystick with his left hand and all six low-force switches distributed between both his hands.

Below: Bryan and his gaming setup from above. Velcro-covered bands and a lap tray hold the joystick and his six carefully positioned switches in place. 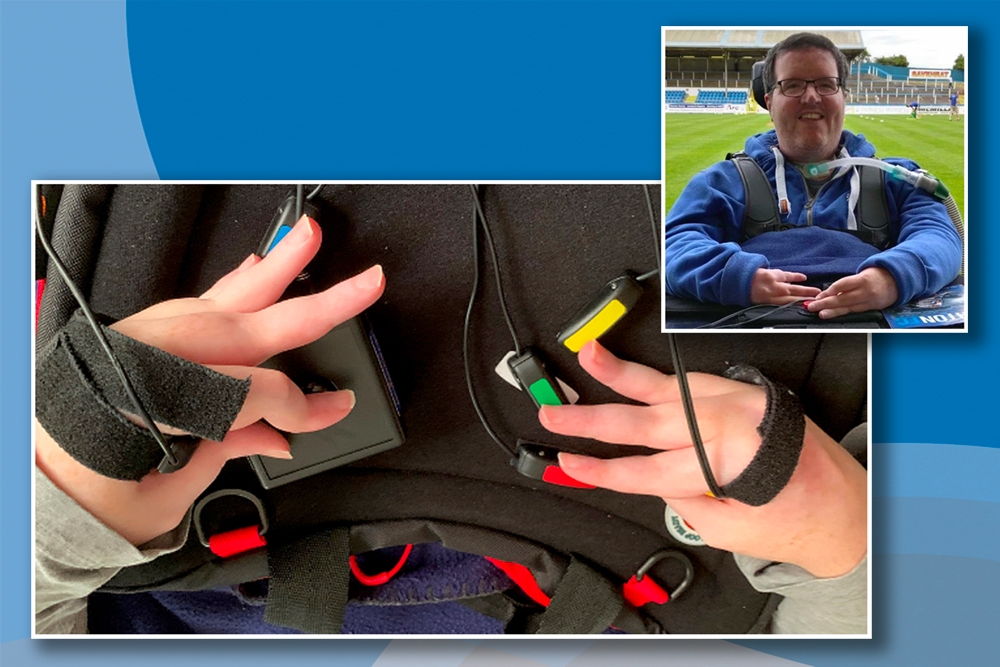