Very excited to share this press release with you from our friends at Ripstone that details their amazing involvement in One Special Day 2017 and beyond:

30th August 2017: Ripstone, a UK-based publisher and developer, have announced their plans to raise awareness and funds, as well as pledging their ongoing support for SpecialEffect, the charity for gamers. 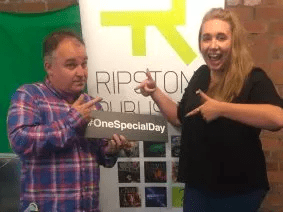 Ripstone will once again be supporting the ‘One Special Day’ fundraising initiative by donating 100% of their profits on 29th September 2017. Ripstone will donate their takings from across their entire catalogue of games including DLC on all platforms they publish on, including Steam, PlayStation®4, Xbox One, and Nintendo Switch. The team will also be hosting a six hour live stream on Twitch from 12:00 to 18:00 BST which will include giveaways, forfeits and general tomfoolery!

Several members of the Ripstone team will be participating in Rough Runner in Manchester on 22nd October, competing in an obstacle course challenge that combines distance running with a variety of game-show inspired obstacles. To sponsor them, head to the JustGiving page here: https://www.justgiving.com/fundraising/ripstoneroughrunner

Ripstone have also committed to donating all money received through their partnered Twitch channel directly to SpecialEffect. Meaning the community can help support SpecialEffect every month by subscribing to the Ripstone Twitch channel, making use of a free Amazon Prime subscription, or simply tipping or cheering during their weekly streams. Follow them at www.twitch.tv/ripstonegames to see when they are live.

Ripstone have also signed up for SpecialEffect’s Twin Town Challenge and GameBlast, both happening in 2018, watch this space for more details.

Hollie Pattison and Michelle Turner, both from Ripstone, were named as SpecialEffect Ambassadors earlier this year. Hollie is the Community Manager at Ripstone, she enthuses “We’re really getting stuck in this year with fundraising for Special Effect, and decided to throw ourselves into some events that definitely fall outside of our comfort zone! TwinTown will definitely be an interesting weekend! Here at Ripstone we’re fortunate to have the ongoing support of our amazing community, who consistently encourage us during our charity streams and are the first to get involved with our fundraising efforts. When we said during GameBlast17 that we weren’t going to stop fundraising, we really meant it!”

SpecialEffect is an award-winning charity and their mission is to enable anyone, whatever their physical disability, to enjoy video games. They actively encourage the games industry to be loud and proud about levelling the playing field for gamers with disabilities.

Dr Mick Donegan, Founder and CEO of SpecialEffect said “The support of Ripstone and their fantastic community has already been something very special. Their support, not only with One Special Day, but in so many other special ways really is going the extra mile, and we honestly can’t thank them enough for the difference they will make in helping us keep on helping gamers with disabilities.”

SpecialEffect are a UK charity that put fun and inclusion back into the lives of people with physical disabilities by helping them to play video games. By using technology ranging from modified games controllers to eye-control, they’re finding a way for people to play to the very best of their abilities. But they’re not just doing it for fun. By levelling the playing field, they’re bringing families and friends together and having a profoundly positive impact on confidence and rehabilitation.

Ripstone is an independent games label that fully fund the development, distribution, marketing and sales of games made by indie teams worldwide. Founded in 2011 by publishing and film industry veterans, to date they have financed and published 15 games across 14 platforms and have worldwide sales in excess of 10 million units. Their focus is on supporting indie developers to make games for PC and home consoles, making sure gamers know about them, and rewarding the talent for it.

Ripstone’s back catalogue includes Ironcast, Stick It To The Man, Pure Pool and Extreme Exorcism. At their home in Liverpool, England they also have a first-party development studio, and their stunning first title Chess Ultra launched in Summer 2017.