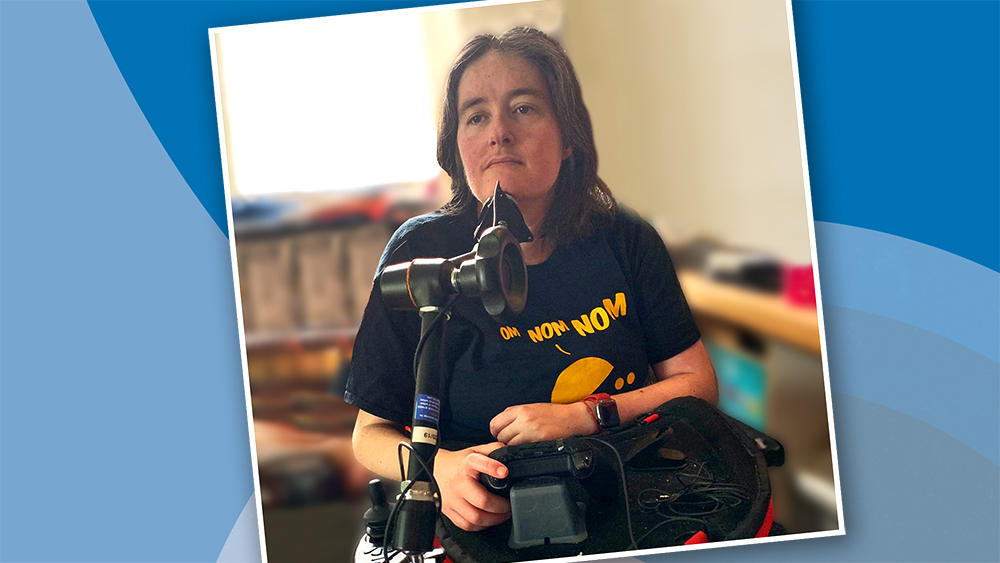 Karine’s getting back up to up speed with her gaming favourites thanks to the support of our specialist assessment team.

She’s loved playing video games since the days of the Nintendo Game Boy, but her multiple sclerosis has affected the movement in her hands – especially her left hand and arm – and she’d had to abandon what she described as “a huge part of my identity.”

“My left hand had given up the ghost,” she writes in her blog post about how she began to game again. “It was just muscle memory that was allowing me to keep moving the buttons. Sadly, I took the decision to hang up my controller.”

She subsequently discovered the Xbox Adaptive Controller and the Logitech Adaptive Gaming Kit which together had the potential to give her back much of the access she needed to play the games she loved. However, using the left joystick was still a major challenge so she contacted our specialist assessment team for help.

In her blog, Karine explains that during the resulting video assessment call our team noticed that she had full control of her neck and head. “Rather than concentrating on my right hand, the one that misbehaves less,” she writes, “They suggested steering with my chin.”

Our team recommended that Karine tried out a carefully selected joystick mounted on an articulated arm and, along with equipment including a velcro lap tray and a wedge to hold her controller in a more comfortably accessible position, sent it to her as a loan.

“My chin… fits the mini joystick like a glove!” she wrote, and since then her chin control skills have become a key part of enabling her to have a wonderful time rediscovering old gaming favourites and exploring new titles to the best of her abilities. She was still finding it difficult to access the brake button for driving games though, so she contacted our team again and together they identified a good place to position a switch to act as a brake.

Karine admits that it’s taking time to get used to her new gaming setup, but she’s up for the challenge.

“To give the gift of gaming to a person with challenging abilities is an incredible thing and can bring so much joy,” she said. “I’ve felt more like myself since I have been able to game again and spend some quality time with my Xbox.”

It’s a privilege to help Karine to play again, and we look forward to supporting her again if she needs us in the future.

Read more about Karine and her accessible gaming setup at https://bit.ly/37CRILp