In space, no one can hear you scream

Our friends at HCS VoicePacks, creators of interactive shipboard computer and companion voices for games including Elite Dangerous, Star Citizen and No Man’s Sky and featuring stars including William Shatner, Brian Blessed and Marina Sirtis, have supported SpecialEffect with revenue from selected voice packs since 2016. Over the years, their Echoes from the Hold voice pack has raised thousands of pounds for the work of SpecialEffect.

Thanks to the voice acting skills of our talented Ambassador David Pearson, HCS are once again supporting One Special Day with the Cecil B Trumpington voice pack. HCS donate 100% of every purchase of it to SpecialEffect so we can make sure even the most physically challenged people get a chance to experience the joy and inclusion of video games.

“Cecil was originally created as an eccentric, ageing bar-fly at Hutton Orbital, featuring in his own radio sketches and prone to the odd mishap.  Working with HCS, the Hutton Truckers community group got together and funded some studio time to have him converted into a companion pack for Elite Dangerous.  Very generously, HCS agreed to let us use him, his cocktail recipes and his… interesting look on life to raise funds for SpecialEffect.” – David Pearson, Hutton Orbital

“Someone lash that drunk down.” – Midnight, AI Ship Companion

If you’re an Elite Dangerous commander and things have been just a bit too serious in your cockpit, this could be voice pack for you. Cecil, the drunken old fool, will make you laugh and wail with frustration in equal measures. Just remember though, in space no one can hear you scream.

(*SpecialEffect and HCS VoicePacks can not be held responsible for ship destruction, interdiction by Thargoids or empty drinks cabinets as a result of flying with Cecil on the crew. You have been warned… Requires VoiceAttack software) 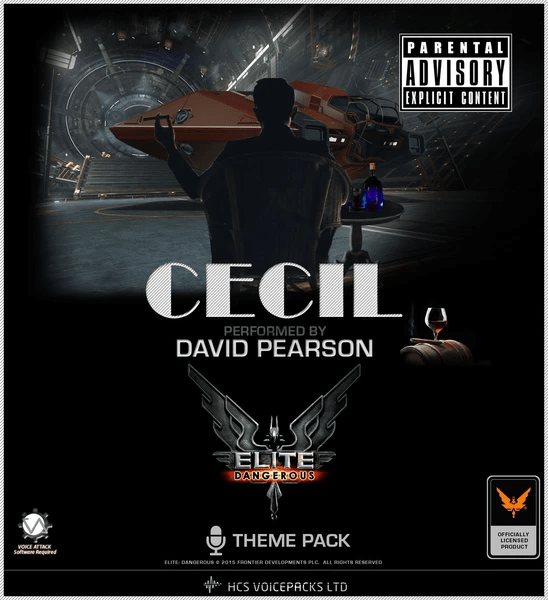