“I thought my gaming days were over…”

Your One Special Day over the years has helped so many people to game again. One of them is Chad, who has muscular dystrophy and is mad about games. Although he’s used several of our setups in the past, he hasn’t been able to play for a while because his condition has progressed. Joe and Frankie went to see if we could help again. Joe takes up the story: ‘Chad’s still got some really good movement in his chin and the fingers of his right hand. We tried a low force joystick by his mouth for player movement and he found he could control it using his bottom lip!” “We added three small finger switches – for pass, shoot and pause – and he was soon playing as his favourite team Aston Villa. He won his first game 4-0!” “FIFA 18’s two button mode has some new accessibility features including auto sprinting and auto switch player, and Chad got on brilliantly with these.” Chad was delighted. “I thought my gaming days were over due to my lack of mobility,” he said on social media, “But thanks to Joe and Frankie at SpecialEffect I can now play FIFA 18 in a different but novel way. Never thought I would play the Xbox using my mouth but if there is a will there is a way!”  This is the difference your One Special Day support is making! 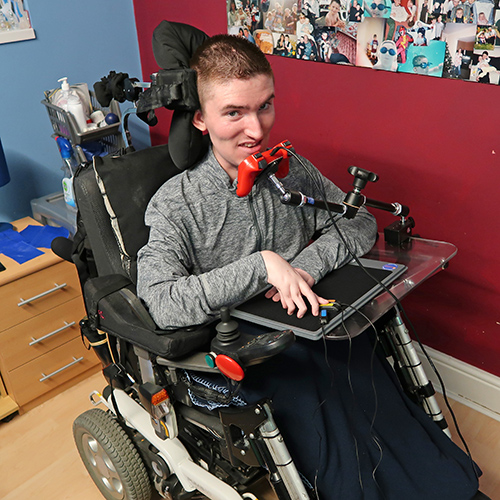