Getting dad back in the game

When multiple sclerosis limited Stuart’s movement to the extent that he could no longer hold a joypad, he was left missing out on important time with his son playing Mario Kart. Our occupational therapists Frankie and Joe took up the challenge to get dad back in the game.

Video game-loving dad Stuart had enjoyed playing Mario Kart with his son until he reached the point where he felt he just couldn’t play to the standard he wanted. Rather than miss out on this important bonding time with his son, he contacted us to see if we could help.

Frankie and Joe, two of our occupational therapists, travelled to Stuart’s home in Leicestershire to assess his available movement and work with him to put together a setup that would allow father and son to get back to racing.

Frankie and Joe established that the movement in Stuart’s right arm was relatively good so it the best option for the main controls. They mounted a Nintendo Pro controller on a velcro-backed wedge and positioned it on a Trabasack, a vecro-covered lap beanbag, so he could rest the controls comfortably and securely on his lap.

The movement in Stuart’s left arm was more limited and foot controls were ruled out as he has no movement in his feet. Because he has full head movement, Frankie mounted an external left joystick by Stuart’s chin on a variable friction arm, then attached it to his wheelchair. All that was needed was a couple of extra left-hand controller buttons for his more limited left hand and the setup would be complete… just the job for an Xbox Adaptive Controller. Using a couple of Spec switches (small, soft-touch buttons) placed close to the left hand on the Trabasack, Stuart was able to operate all the controls he needed.

After spending the best part of the day with Stuart, Frankie and Joe said goodbye, leaving dad with an hour to practise on his new setup before his son arrived home from school. Looks like dad’s back in the game!

Below: Stuart takes control later in the day against his son 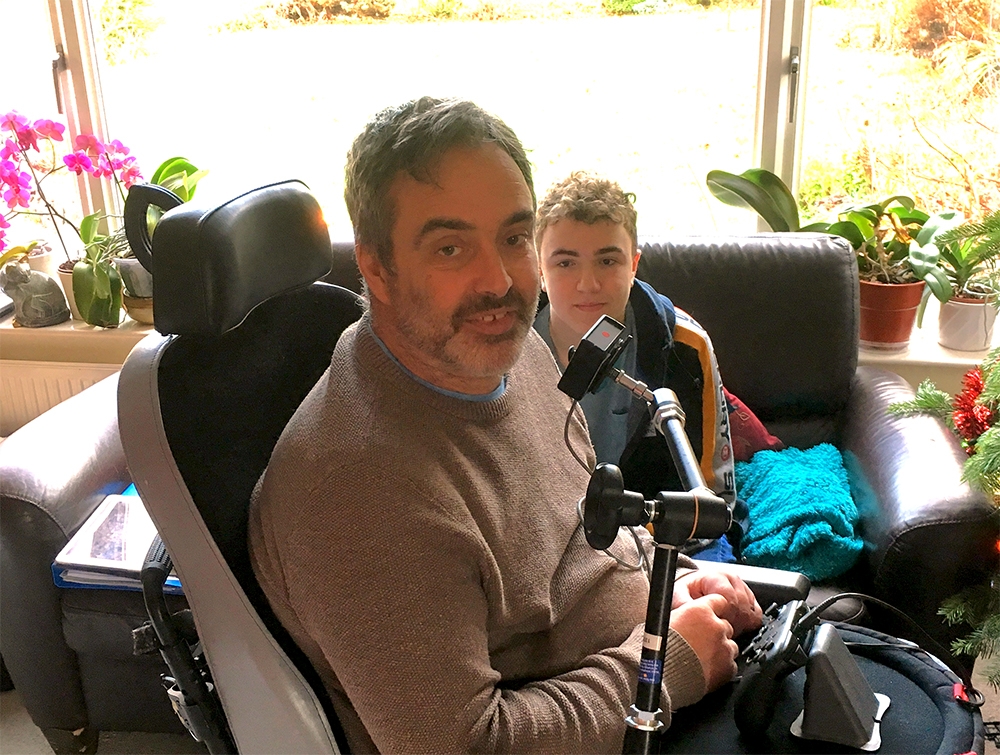