Yes! Ron’s finally gaming, and we’re so pleased we could ease him into the mayhem of his first Mario race with a joystick that mimics the feel of his powered wheelchair control.

Ron’s been eager to start enjoying games, but his cerebral palsy makes using a standard controller very tricky. He’s a big Mario fan, so our specialist assessment team suggested that harnessing his wheelchair control skills to play Mario Kart on a Switch might get him off to a flying start.

Face-to-face assessment visits aren’t possible at the moment, so following a video assessment call our team loaned him a setup based around a carefully selected low profile joystick fitted with a similar top to the one on his wheelchair, with the aim of giving him as much comfort and control familiarity as possible.

Then, with Mario Kart 8 set to auto accelerate, all he needed was a way to throw items. Initially Ron tried a button switch by his head, but he felt that placing it close to his joystick might work better – and sure enough it’s working really well for him.

Matching Ron’s equipment as closely as possible to his abilities and existing technology has given him the chance to enjoy his games so much more. He’s having so much fun, and it really is an honour to have given him the best gaming start possible.

Welcome to the magic of games, Ron!

Below: Ron’s ready to race with his adapted gaming setup. The joystick and button are secured to a non-slip Velcro covered mat and connected to his Switch through a Titan adaptor and an Xbox Accessible Controller 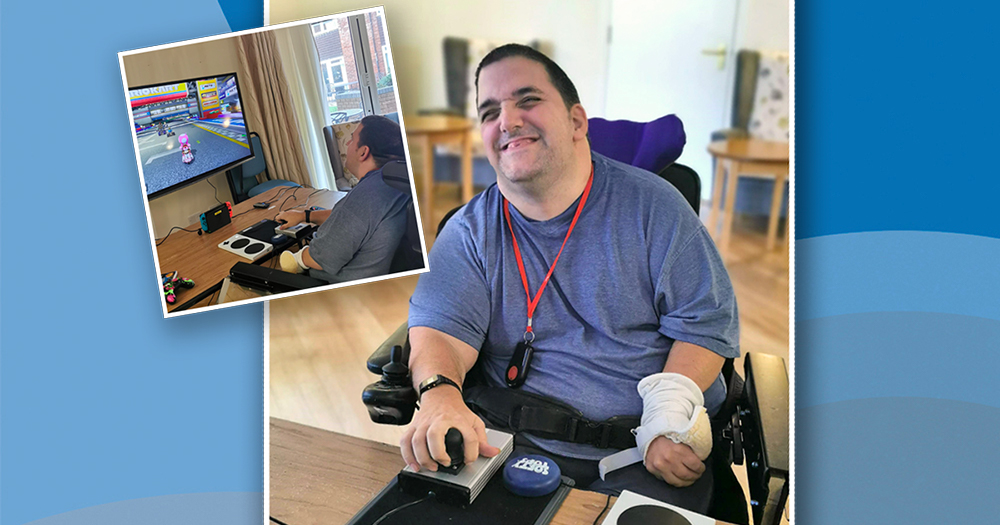