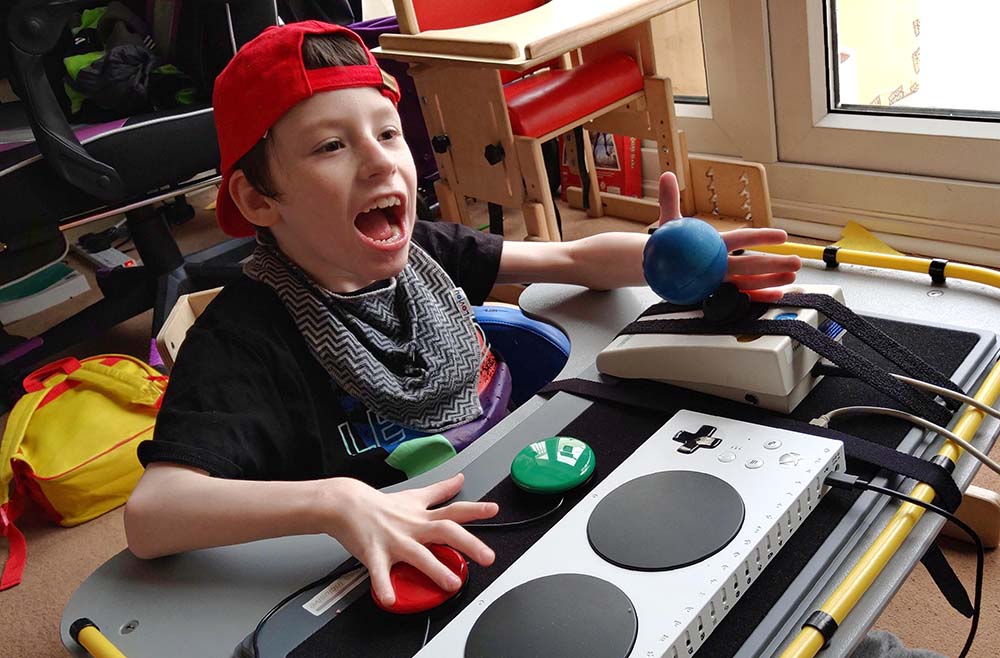 What a smile! Charlie’s finally able to enjoy the games he’s spent so long watching other people play, thanks to a custom controller setup devised by our specialist assessment team.

“SpecialEffect have given Charlie an entrance to many worlds that he loves,” said his father. “He now loves to join in.”

Charlie’s cerebral palsy severely affects his movement and speech. He loves games and enjoys watching online gaming streams, but he struggles to coordinate his arms to use the buttons and joysticks on a standard controller effectively. He was getting frustrated because he couldn’t play, so his father asked if we could help him gain a level of independence to properly connect with something he loved and be included in the family’s gaming activities.

Our team talked to his father via a series of online support calls to find out the full extent of Charlie’s functional movements and recommend some age-appropriate games. They discussed potential ways to access Mario Kart and Paw Patrol and, after considering several options from our extensive equipment library, they sent the family a custom equipment loan setup that included several large button switches to replicate the controller buttons, and a large joystick that was potentially easier for Charlie to use. The therapists also included suitable materials to securely mount the setup to Charlie’s wheelchair tray, along with appropriate connection equipment for his games console.

The setup has been a huge success – we’re already sending Charlie other games to enjoy and we’re poised to post out extra buttons as he gets used to his new way of playing. His father believes that Charlie’s not just benefitting from the immense leap in fun and inclusion:

We’re delighted to see Charlie so happy, and our lifelong support means that we’ll continue to support him and his family for as long as they’d like us to.

A big thank you to Riot Games for initially alerting Charlie’s father to our work helping people with physical disabilities to enjoy the magic of video games.